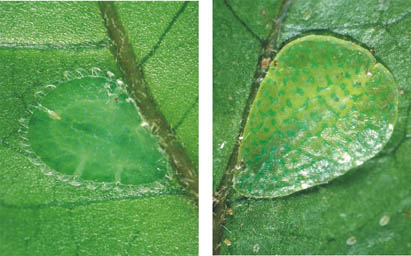 [Ctenochiton paraviridis]. L: a young adult female. R: a mature female with several new crawlers nearby on the leaf.

The species name para = near, with viridis = green, means near to the original sixpenny scale Ctenochiton viridis described by William Maskell in 1879.

This scale is closely related to the three other species of Ctenochiton, the sixpenny scales.

Biology: Has one generation per year and overwinters as small 2nd-instar females and males. As soon as spring growth starts on the host trees, the female scales move off the old leaves onto the new shoots and take advantage of the rising sap to speed up their development to adult. The males stop feeding and stay behind on old leaves; they lose their mouthparts as they moult and go through a metamorphosis to emerge as tiny winged insects quite unlike the female scales. The adult males live for only a few days, long enough to mate with females.

This very distinctive effect is caused by female spotted sixpeny scales, and is especially seen on leaves of pigeonwood, Hedycarya arborea.

In the photo, the right-hand leaf has "bumps" on the upper surface. These are caused by the female scales [in the left-hand leaf], which form depressions or hollows on the undersurface. The leaf is permanently deformed and these "bumps" and hollows remain after the scales have died and fallen off.