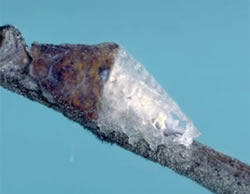 This picture of an old female has been taken with the scale's head facing up the twig, normally she faces down the twig. The dark half is the female's body folded into the anterior half of the test, after she has produced her crawlers (young scales). The glassy wax half acted as a brood chamber and gave shelter to the newly born crawlers before they came out to disperse and find a place to settle.

Biology: Probably one generation a year.

Found on stems of beech trees: