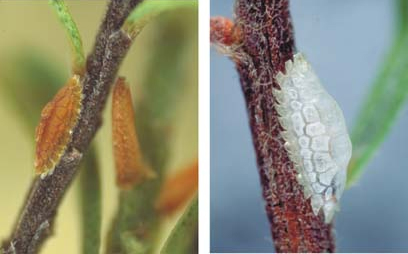 [Crystallotesta leptospermi]. L: young adult female, her colour pattern mimics the leaf bud scales of the host plant kanuka. R: old female, her body has shrunk to a small dark lump at the head [head facing down the twig] after producing her young.

William Maskell named this species in 1882, from the genus Leptospermum, its host plants.& At that time both kānuka and mānuka were known as Leptospermum species.

Biology: one generation per year, overwintering as immature males and females. The new generation is produced through summer. Males and immature females develop on the undersides of leaves and the young adult females migrate to stems.

Found on the stems and underside of& leaves of: