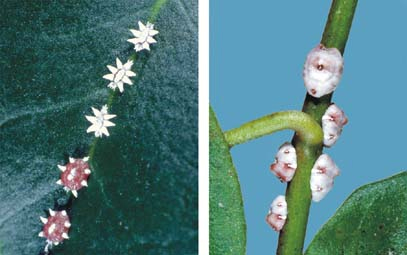 [Ceroplastes sinensis] L: immatures: 2nd-instars (white) and 3rd-instars (pink). R: adult females; they have "buttons" and stripes of a different kind of wax that is left over from the immature stages.

Del Guercio named this species sinensis in 1900, because it was thought to come from China, but more recent research by Qin et al. in 1994 concluded that it was probably native to Central or South America. It is also known as hard wax scale (it is not easily squished).

Status in New Zealand: an exotic (adventive) species, first recorded here in 1932. Chinese wax scale is an important pest of citrus in Northland and Gisborne, and of feijoa in Auckland. In gardens it can be a problem on holly and periwinkle. It is occasionally found on native plants. It has been recorded from Three Kings (Great Island) and from most regions of the northern half of the North Island.

Biology: one generation per year in New Zealand, overwintering as immature and adult females. The new generation is produced through summer and the young tend to settle on the leaves before moving to the stems. Males are found as immatures but apparently do not develop to adult, and are not necessary for reproduction.

Found on the stems and leaves of: