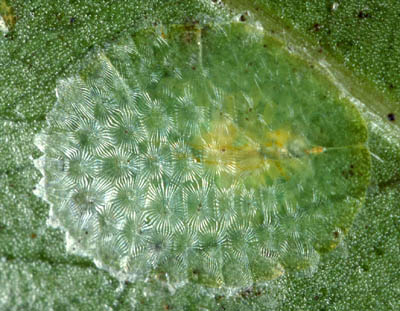 [Aphenochiton subtilis]. Adult female. The rows of waxy plates covering the insect body show up particularly well because this photo was taken with cross-lighting.

This scale is very flat and thin in life, and very similar in general appearance to Aphenochiton pubens, the translucent scale. These two species have even been found together on the same leaf on several Mida trees at Sharps Bush, Auckland. However, when slide-mounted, filmy scale can be easily distinguished from translucent filmy scale because the lower legs (tibia + tarsus) are fused together [in translucent scale the legs have all their normal joints].

Biology: Has one generation per year and overwinters as the adult female. The most favoured host plants are Hedycarya and Mida.

Found on both sides of leaves of: