The Phylum Onychophora are a very small group of terrestrial animals, commonly known as peripatus or ‘velvet worms’ from their velvety appearance. 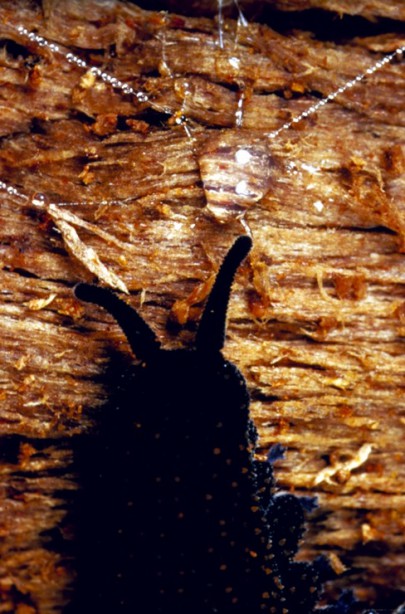 This group has long been regarded as important in evolutionary biology due to their phylogenetic position, ancient history and Gondwanan distribution. Evolutionary relationships constructed using morphology and molecular data clearly show the Onychophora as a sister group to the Arthropods and a member of the Ecdysozoans.

They are truly archaic creatures, having scarcely changed appearance since 550 million years ago when present in the Cambrian Burgess Shale sediments where they lived in shallow marine environments.

Today, the phylum Onychophora consists of entirely terrestrial forms and is split into two families:

Present-day Onychophora are restricted to moist, dark microhabitats such as within and under rotten logs, leaf litter, under stones, and crevices in rocks or soil.

Peripatus are nocturnal predators which trap their prey using a sticky substance expelled from a pair of modified limbs, the oral papillae located on either side of the head.

within this group are surprisingly diverse. These include oviparity, ovoviviparity, viviparity with yolk-free eggs, and placental viviparity. Oviparity and ovoviviparity are the common reproductive strategies of the Peripatopsidae. Oviparous forms lay eggs singularly and possess an obvious ovipositor positioned between the last pair of legs, while ovoviviparous forms have eggs that hatch internally and give birth to live young.

There are currently five species of Onychophora that have been formally described in New Zealand on the basis of morphological data. The main observable distinguishing features are reproductive strategy (oviparous or ovoviviparous), numbers of pairs of legs, features of the feet. There are many additional forms that have been uncovered during the revision of this group that do not fit the current descriptions which, along with the described species are given in the identification guide.

There are three species of ovoviviparous forms in New Zealand.

This species is the mostly widely distributed form within New Zealand. However, it is actually a species complex, which is under revision by PD Dr Hilke Ruhberg at University of Hamburg. Subsequently all ovoviviparous forms with 15 pairs of legs with 3 distal papillae on the feet are considered to be P. novaezealandiae. There is no defined 'type' specimen or type locality, other than being 'near Wellington'.

This species was described as P. novaezealandiae var. suteri, and initially was found to be confined to the Mt Taranaki region, including Lake Rotokare near Eltham. However subsequent collections of forms with 16 pairs of legs have been made from Whakapapa, Coromandel, and Waitakere Ranges (refer to region in identification guide). Therefore, it is likely that numbers of pairs of legs alone is not a reliable character in defining species. No defined 'type' specimens exist.

Until recently, this species was only known from the type locality of the Twin Forks Cave, Paturau in the northwest Nelson region. The type specimen is lodged at the NZAC. Other localities include the Aorere Valley, and more recently P. indigo has been found in the vicinity of Perry's Hut, Heaphy Track.

This species is found throughout most of the South Island alpine zone in beech forests through to alpine zone under stones up to 1650m. The type locality is considered to be the head of Lake Te Anau. There has been confusion of the taxonomic name of this species in that it has been considered a synonym of O. insignis, which is a species with a type locality in Victoria, Australia. However, morphological and molecular analysis has shown that this species is monophyletic with respect to O. insignis from Australia, so the description of Dendy (1900) of O. viridimaculatus is valid.

This species is found predominantly in rotting beech logs throughout the Takitimu Ranges. The type material consists of 4 small juveniles, although further collections of adults also exist at the NZAC.