A PhD and new pastures for Hester Williams

We are delighted to report that Hester Williams has passed her PhD and that her degree is to be conferred in June 2020. Hester joined us at the Lincoln campus in late 2016, where she was based full time until she submitted her dissertation in October last year. 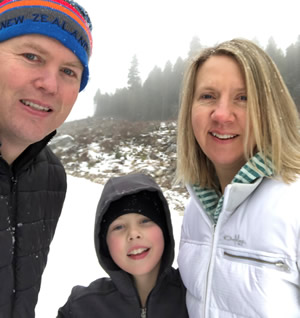 Hester and her family in Canada

Hester’s research focused on investigating factors influencing the establishment and persistence of small populations in order to gain a better understanding of the early stages of species invasions. She used a classical biocontrol agent as a case study. “In any biocontrol programme the establishment of agent populations is a critical step towards achieving success,” explained Hester. “Understanding and identifying the ecological processes that underpin successful establishment is not only important in weed biological control, but also for preventing invasions of unwanted species.” Biocontrol agent introductions are essentially “planned invasions” of exotic species and are subject to the same factors operating during unwanted invasions. They therefore offer a unique opportunity to experimentally study the processes involved in establishment, serving as a proxy for invasive species.

More specifically, Hester’s research aimed to investigate the role of the Allee effect in the establishment success of species. The Allee effect is a biological concept defined as a positive relationship between population size and fitness, which is important when population densities are low, such as those that are typical in the early stages of invasions. The Allee effect may be caused by factors such as mate-finding failure or too few individuals in a population to saturate natural enemies. Her research also examined how spatial management at the point of introduction could render populations more vulnerable to the Allee effect, thereby facilitating their eradication. Hester explained that both aims were important. “Despite strong theoretical findings that the Allee effect can prevent small founder populations from establishing, there was limited scientific data. Further, there is mounting social pressure to find alternative, ‘greener’ tools to eradicate new incursions of invasive species,” she said.

The tradescantia leaf beetle (Neolema obligini) served as Hester’s model insect. She investigated the impact of release size on establishment success of the beetles, finding that releases of larger numbers of individuals increased the probability of a population establishing. Increased aggregation of individuals through releases of large numbers facilitates necessary interactions such mating and predator dilution, minimising the Allee effect. She also observed heavy predation on the immature stages of the beetle by generalist predators, which would potentially severely affect establishment success. In addition, Hester’s study showed that adults of the leaf beetle respond to, and potentially utilise, feeding-induced plant volatiles as a cue to find their host, which would increase dispersal success among host plant patches in diverse landscapes and increase aggregation on those host patches.

Hester’s PhD research offers some valuable insights into managing new incursions. Since the Allee effect plays an important role in the dynamics of newly established small populations by driving them to extinction, it could be critical in guiding eradication efforts. The Allee effect, together with other processes that occur when species have small population sizes, eliminates the need for the removal of every single individual of a new invasive population during management actions. Hester recommends the strategic removal of host plant patches to limit and isolate resources at the point of introduction (or areas of high population densities) of a new species as an effective tool to achieve eradication. By targeting and removing heavily infested host plants there is an immediate reduction in population size (potentially below the Allee threshold). Further, by limiting and isolating remaining host patches, dispersal propensity in larger populations is increased because of competition, but dispersal success between patches is reduced, resulting in reduced population sizes. These populations could then be subjected to an Allee effect, or to tactics that exploit an Allee effect, thereby achieving eradication.

Shortly after submitting her dissertation, Hester moved to Peachland in British Columbia, Canada, with her husband and 12-year old son, where she is hoping to find research-related work. Hester says she is so grateful for the opportunities and experiences she had in New Zealand. “I met so many knowledgeable and helpful colleagues and was generously provided ample lab and greenhouse space to support my research,” said Hester. “I hope to continue to foster the friendships and relationships I was privileged to have made during my time in New Zealand,” she added.

Hester Williams was registered at Auckland University and her PhD project was part of the ‘Urban Eradication’ programme funded by the Ministry of Business, Innovation and Employment. She was supervised by Darren Ward (MWLR), Mandy Barron (MWLR) and Ecki Brockerhoff (Scion), with Andrew Liebhold (USDA) acting in an advisory capacity.