Valuing the effect of soil erosion on productivity

To create efficient erosion control policies, it is important that the cost of implementing an erosion control measure justifies the benefits. While costs are typically straightforward to measure, the benefits include fewer tangible things like avoided impacts on farm incomes, impacts on the natural environment (water quality and biodiversity), and communities (e.g. greater recreation and ecotourism activities). These benefit categories can be difficult to estimate and monetise, and current work under the MBIE Programme “Smarter Targeting of Erosion Control (STEC) programme is advancing this goal (Walsh et al. 2021). We describe here efforts to better monetise the impact of erosion on farm productivity. Since the New Zealand economy is highly dependent on agriculture, these estimates should be valuable to both farm planning and governmental policy analysis. There are also other efforts to improve the monetization of benefits related to water quality, landslide impacts, and non-use value.

In New Zealand, efforts to assess the costs and benefits of erosion mitigation measures are limited by a dearth of benefit estimates and spatially explicit cost data. To date, there are only limited New Zealand-based studies that have attempted to monetise the adverse effects of erosion, and none of them have estimated the impact of erosion on agricultural production. Our study aims to fill this gap and show how these losses could differ across the landscape. The analysis focuses on the Fordell-Kakatahi area, located in the south of Wanganui district, which is a part of the Manawatū-Whanganui region. Estimated impacts were obtained by integrating spatial information on soil erosion rates, erosion-related productivity losses, and farm income. Our results include an estimate of the marginal cost of surficial (overland) and mass movement erosion individually as well as the aggregated marginal cost of erosion.

Our results showed that the marginal cost of erosion (in terms of negative impact on productivity) ranges between $0.03 and $5.61 per tonne, with a mean value of $1.8 per tonne, depending on land use. The highest marginal cost of aggregated erosion was experienced in vegetables, fruit, and dairy land uses, while the lowest marginal cost of aggregated erosion was experienced in exotic forestry, sheep and beef, and other pasture land uses. The high erosion cost for horticulture is mainly driven by the high annual net revenues (7–9k/ha). Sheep & beef, and exotic forestry are often located in marginal land with relatively low annual net revenues, and therefore the marginal impact of erosion was lower. For the Fordell-Kakatahi area, the per hectare annual net revenues for sheep & beef was estimated at approximately $8, with exotic forestry estimated at $600 (Fig. 1). 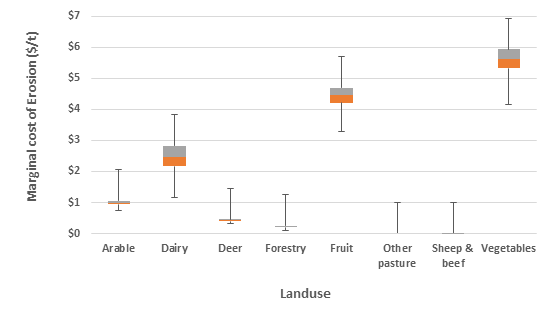 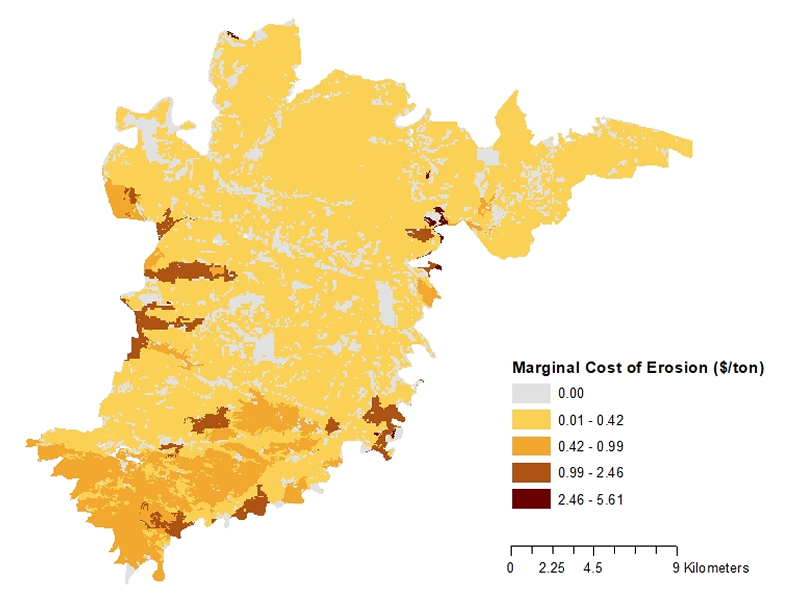 Figure 2. The spatial distribution of the marginal cost of erosion ($/tonne)

Erosion is a significant problem across New Zealand, and new methods and policies are being developed to combat it. To be able to evaluate those policies properly in a spatially explicit fashion, it is important to value all the relevant impacts. This case study illustrates methods for valuing agricultural productivity-related impacts. The outputs showed that the marginal cost of erosion depends primarily on the profitability of the land use and is adversely correlated with the amount of erosion. Although these results are particular to the profits and erosion rates in this case study area, it can be replicated in other areas. If widely deployed, they can help illuminate significant trade-offs in a cost-benefit decision framework. However, it is important to note potential information gaps and areas of future research. These estimates are dependent on existing research on productivity impacts, as well as on the quality of erosion and land use data. These impacts can also be used in coordination with other benefit and cost estimates currently under development in the STEC programme. For example, new stated preference survey estimates are available to estimate water quality benefits, and Earthquake commission data have been used to analyse the impact of erosion on property damage.