Fine sediment is a major contaminant of aquatic ecosystems. The environmental behaviour of fine sediment depends on properties of the particles as well as mass concentrations. These properties include particle shape and composition and are referred to in the STEC programme as ‘sediment quality’ or more correctly as ‘sediment related water quality’ (SRWQ). SRWQ includes water quality variables associated with 1) suspended particulate matter (SPM), 2) reflect particle properties, particularly optical properties including visual clarity and turbidity, or 3) are themselves special categories of particles such as E coli bacteria.

The relationship of SPM to turbidity depends on particle size and other properties of SPM.  So, turbidity is routinely (locally) calibrated to SPM concentration.  However, turbidity is often recorded as such (in FNU – formazin nephelometric units) when what is really needed is a measure of water clarity – which is not reliably indicated by turbidity unless locally calibrated.  Use of turbidity data is compromised because different sensors give numerically different outputs even when calibrated identically to formazin.

An international standard, ISO 7027 (specifying measurement of scattering of near infra-red radiation centered on 90 degrees), was introduced to improve comparability of turbidity data.  However, different ISO 7027 turbidity sensors operated side-by-side in the Mataura River in Southland were still found to vary appreciably in numerical response.  As an outcome of a NZ Hydrological Society Technical Workshop in 2017, where issues of turbidity sensor comparability were raised, a series of tank experiments were conducted to compare the outputs of several different ISO 7027 turbidity sensors that are commonly used in NZ. 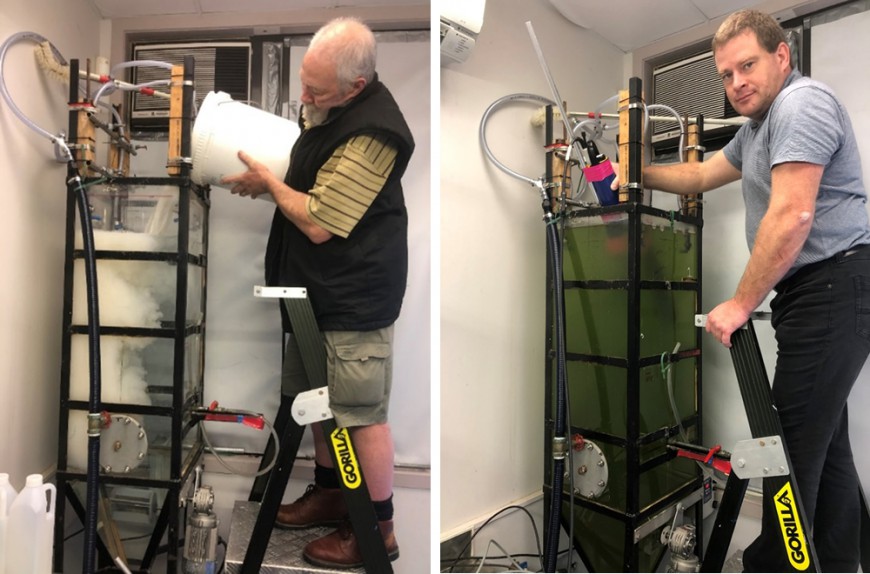 All the sensors were calibrated before and after tank testing with freshly-made formazin standards so as to compare them on the same basis.  We measured concentrations of test suspensions both in terms of total suspended solids (TSS; g m-3) and light beam attenuation (beam-c; m-1) measured in the laboratory by beam transmissometer (Figure 2).  Beam-c is strongly inversely proportional to visual clarity (and proportional to SPM concentration), giving the metric immediate practical meaning. 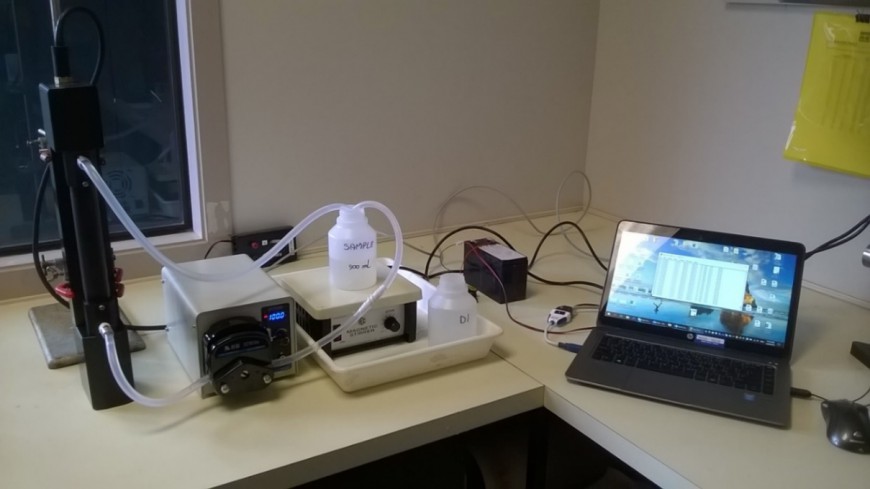 We found that the outputs of different ISO 7027-compliant turbidity sensors (in ) were strongly linearly related, but ranged about two-fold in magnitude in all three tested suspensions.  Figure 3 shows data for river silt by way of example.  Plots for kaolinite and algae were broadly similar, with the Hach 2100Q-is cuvette turbidimeter reading consistently high, the YSI EXO2 sonde turbidity consistently low, and other sensors having intermediate responses as shown in Figure 3.

Apparently, even for turbidity sensors meeting the same design standard (ISO 7027), setting instruments to read identically in formazin does not guarantee the same, or even similar, numerical output in natural suspensions.  The variation in sensor response seems to arise from small design differences between instruments combined with the very different light scattering properties of natural SPM compared with formazin. 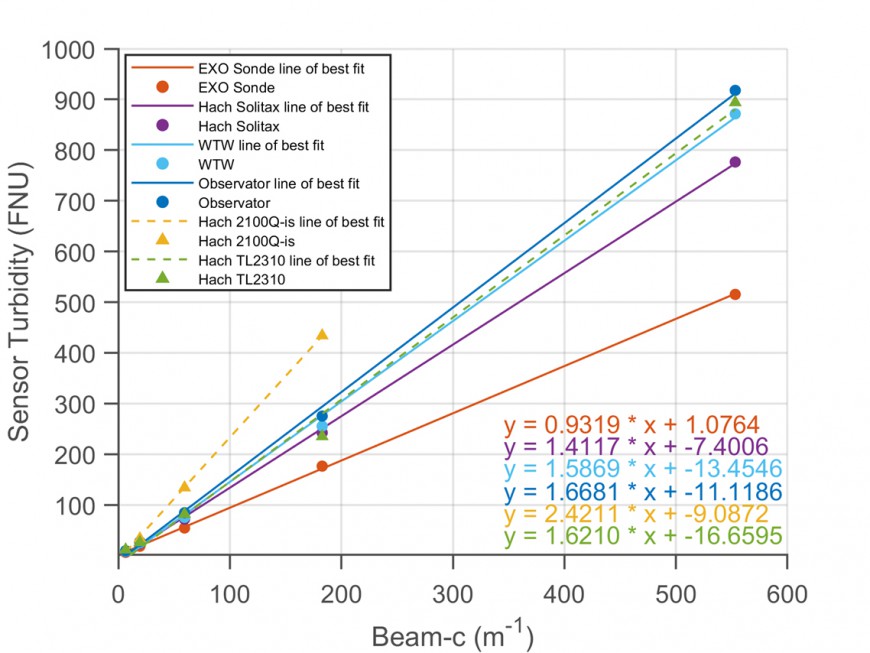 Our finding of weak numerical comparability of different turbidity sensors, despite compliance with the ISO 7027 design standard, suggests that turbidity in FNU should not be treated as an absolute quantity. Turbidity is merely a relative measure of light side-scattering that usefully indicates relative SPM concentration or water clarity.  To estimate actual (absolute) SPM concentration (e.g., TSS; g m-3) or water clarity (either visual clarity or light penetration) requires local calibration of the turbidity sensor.

Since turbidity is poorly comparable on different instruments, it follows that laboratory formazin-based turbidity measurements are of dubious value. Fortunately, laboratory turbidity can be replaced by absolute measurement of the light beam attenuation coefficient (beam-c) – the reference quantity in our experiments (Figure 3).

Based on these findings, we recommend that the common practice in New Zealand of removing field turbidity sensors for periodic laboratory recalibration to formazin is best abandoned.  Instead, effort should go into locally calibrating field turbidity sensors to the variables of real interest – usually SPM or visual clarity.  The resulting ‘rating curves’ permit continuous turbidity records to be converted to the variable of interest in much the same way that a stage-discharge rating permits continuous stage records in rivers to be converted to discharge.  Turbidity sensor drift can be conveniently checked on-site by fairly precise measurement of visual clarity alongside the continuous sensor.  We expect it should be entirely possible to dispense with the traditional reference material, formazin – a hazardous substance that is inconveniently unstable at lower concentrations.

Because turbidity data are “numerically ambiguous”, turbidity is not suitable as a metric in studies of the effects of fine SPM on aquatic life (TSS or visual clarity or light penetration might be appropriate, depending on the mechanism of SPM stress on aquatic animals or plants.)  Likewise, turbidity is unsuitable as a metric in environmental standards.  We may note that NZ’s National Policy Statement for Freshwater Management (NPS-FM2020) gives standards for visual clarity in waters to protect aquatic life (at Table 8), but not turbidity – because of very valid concerns about the comparability of turbidity data.

MBIE Envirolink funding of the experiments is acknowledged, and the work, including a journal article, is being completed with funding from the STEC Programme.