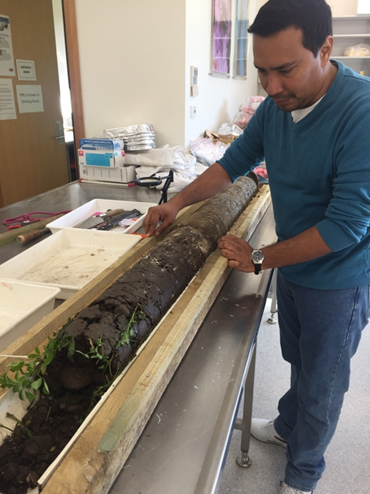 Soil core extracted to a depth of 1.5 m from lucerne to collect samples for analysis of the microbial processes regulating carbon and nitrogen cycling

Jonathan Nuñez, a PhD student at the University of Canterbury with colleagues from Manaaki Whenua – Landcare Research and Lincoln University collected deep soil cores under irrigated lucerne and analysed data on microbial activity and abundance of key genes regulating nitrogen cycling in topsoil (depth 0-0.1m) and subsoil (depth 0.3-0.5m). With high nitrogen availability in the topsoil, nitrate concentrations were independent of microbial variables and their drivers. In contrast, in the subsoil, nitrate concentrations were driven by the abundance of bacteria and denitrification enzyme activity that are both regulated by the size of the pool of mineralisable N. In the subsoil, but not in the topsoil, bacterial species richness had an indirect effect on nitrate concentration. We showed that microbial properties are the dominant regulators of nitrogen cycling in the subsoil and are important for regulating nitrate concentration that is a precursor of nitrogen leaching losses.

We conclude that manipulating soils with low nitrogen concentration to reduce leaching losses may be achieved by reducing nitrogen inputs in topsoil and managing carbon inputs from plants or amendments into subsoil to promote nitrogen immobilisation and enzyme activity to reduce nitrate concentrations.