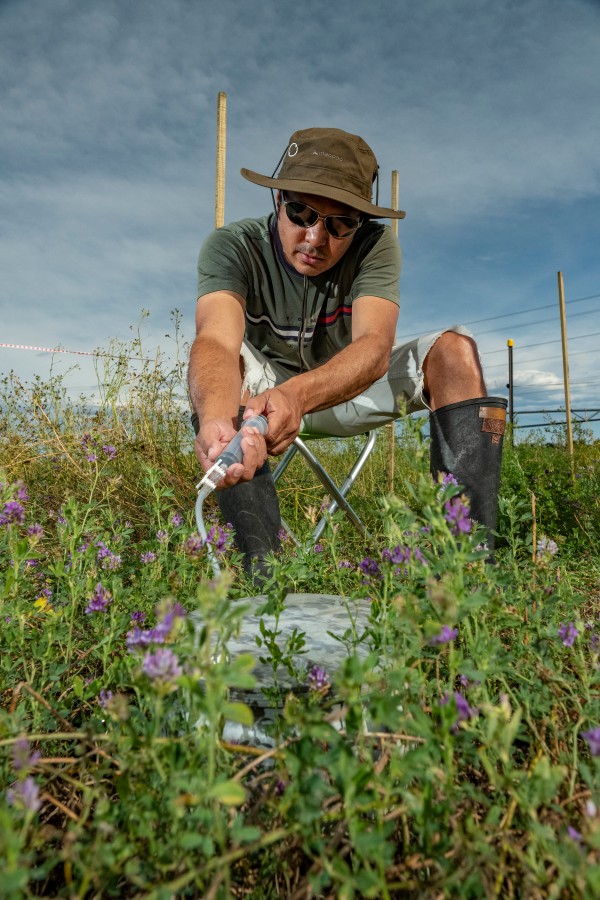 William Talbot, PhD candidate and collaborators from Lincoln University, Plant and Food Research, and Manaaki Whenua – Landcare Research investigated the effects of input of carbon as sucrose for undisturbed soil monoliths planted with ryegrass/white clover and lucerne grown in a lysimeter facility. Sucrose was applied at two rates: 12 tonnes/ha and 24 tonnes/ha. Cattle urine was applied to the lysimeters at the Ashley Dene Research & Development Station. Leachate was collected after each drainage event and then chemically analysed. Gas samples were collected twice a week after the urine was deposited for three months. Soil samples were also taken to analyse the abundance of soil ammonia oxidising bacteria that regulate the production of nitrous oxide.

We found that the addition of a readily available source of carbon to the soil reduced nitrate leaching in ryegrass/clover by 75% for the lower rate of carbon application and 91% for the higher rate of carbon application. For lucerne, the addition of carbon reduced nitrate leaching by 51%, due to increased immobilisation of nitrogen. We found that nitrous oxide emissions were slightly lower for lucerne crops compared to ryegrass/ white clover. However, we found that adding carbon as sucrose did not significantly reduce nitrous oxide emissions.

To determine the effects of adding sucrose on nitrous oxide emissions in field conditions, we repeated the experiment with sucrose at a lower application of 3 tonnes/ha to replicated plots of irrigated lucerne. This research was led by Adriano Nascente, a visiting scientist from Embrapa, Brazil, with collaborators from Manaaki Whenua – Landcare Research over a period of 36 days in summer. Our findings highlighted the linkage between carbon and nitrogen cycling. Addition of sucrose increased carbon availability in the soil and the rate of respiration from increased microbial activity and this led to lower concentrations of nitrate and ammonium which we attributed to enhanced nitrogen immobilisation. Confirming similar findings from our lysimeter experiment, nitrous oxide emissions were lower from soils treated with sucrose, but the difference between the treatments was not significant.

We do not suggest that adding sucrose would be practical or sensible as a farm management practice. However, our findings demonstrate proof-of-concept that increasing carbon inputs can decrease nitrogen losses from both leaching and gaseous emissions. Additionally, the project highlights the importance of understanding the soil microbial properties which regulate processes such as nitrification and immobilisation, thus affecting rates of nitrogen loss.

For more details go to