An application to release a Brazilian yellow leaf spot fungus (Kordyana sp.) was approved by the EPA in June 2013. This is the fourth biocontrol agent proposed for tradescantia in New Zealand.

The application and decision documents are available on EPA's website.

This application was submitted by Auckland Council, acting on behalf of the National Biocontrol Collective, a consortium of regional councils and the Department of Conservation. The Collective funds the development of weed biocontrol programmes in New Zealand. Landcare Research was the science provider for this research. Landcare Research commissioned Dr Robert Barreto (University of Viçosa, Brazil) to conduct research in Brazil to determine if the yellow leaf spot would be suitable to release in New Zealand. Landcare Research contracted Jane Barton to provide expert input on plant pathology, and Richard Hill & Associates to prepare the application and manage the application process on behalf of Auckland Council, including  pre-application consultation with EPA and other stakeholders.

Dense mats of tradescantia (sometimes called wandering Willie or wandering jew) form at many forest margins, in forest clearings, and on stream margins in northern New Zealand. Mats overshadow and kill low-growing plants, including native tree seedlings that are essential for forest regeneration. Without intervention, heavy tradescantia infestations guarantee the eventual destruction of small forest remnants, and shrinkage of larger stands over time as forest margins retreat. Tradescantia is a hated weed in suburban backyards and civic parks, and commonly causes severe allergic reactions in dogs that walk in it. Tradescantia has no recognized virtues. 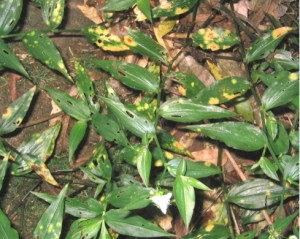 The biological control programme aims to gain control over this weed by establishing a range of natural enemies that damage it in a variety of ways. EPA has already approved introduction of the chrysomelid beetles (Neolema ogloblini, Lema basicostata and Neolema abbreviata) that feed on the leaves, stems and shoot tips respectively.  This application seek approval to release the yellow spot leaf fungus Kordyana sp., which will also be introduced from Brazil, the home range of the weed.

Together, the damage caused by control agents is expected to benefit the environment in two ways: by reducing the growth rate and bulk of tradescantia where it currently exists, baring enough ground to restore recruitment of native seedlings in forest ecosystems, and by stopping the development of damaging mats at new sites of invasion.

The following potentially adverse effects of introducing Kordyana sp. have been identified;

None of these risks is considered to be significant. Host range tests show that no native plants will be at risk from Kordyana sp. There are valued ornamental house plants related to tradescantia, but none were susceptible to attack in tests. The agent is host specific to the weed, and because significant infections will occur only where the weed is abundant, no significant disturbance of ecological relationships can occur outside of tradescantia infestations. The presence of tradescantia itself massively modifies natural interactions between species, and any reduction in the weed will help reverse those impacts. Some organisms are more abundant in tradescantia than in other vegetation, but this small benefit is unlikely to ever outweigh the adverse effect of the weed on other species.

The EPA Māori National Network was consulted over plans to introduce control agents in 2007 and again in 2011. Plans to introduce a suite of control agents were presented at that time, and the costs and benefits of biological control of tradescantia were canvassed.  As this is the third application for the same project, EPA has advised that further consultation with the Network would not add significantly to our knowledge of Maori views on the introduction of Kordyana sp. Auckland Council intends to convene face to face meetings with Iwi Maori in the region in June 2012 to discuss the proposal.

The main beneficial and adverse effects identified in previous consultations are recorded here and will be addressed in the application form. The Network will be informed when the application has been submitted and is open for public submissions.

Safety issues are paramount in the minds of biocontrol of weeds researchers. Researchers rigorously test all proposed agents to assess the risk of damage to non-target plants. A set of procedures was developed to help researchers choose a suitable shortlist of test plants, and this methodology is now well-accepted internationally (Wapshere, 1974).  The technique is under constant review to update best practice (e.g. Sheppard et al., 2005; Briese, 2005).

The results of host range testing conducted in Brazil will be summarised in the application. The original data is contained in the following unpublished reports. Interpretation of these reports has been peer reviewed by Dr Sara Dodd and Dr Stan Bellgard of Landcare Research. Their review will be found in section 9.2 of the application.

Find the complete list of cited references relating to this application.