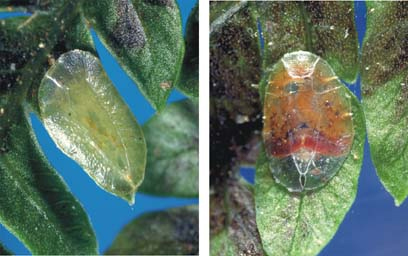 There are 2 species in this genus, named pounamo- (greenstone) with -coccus (scale). The common name for this species is because it lives on ferns. (The other species has only been found in Fiordland, on trees such as five finger, and not on ferns).

Her body has partly shrunk as she produced her young crawlers and there is a clear space at the back (brood chamber) where the new born crawlers shelter before moving away.

Biology: one generation per year, adult females overwinter and the young stages appear in late spring to early summer.

Found on the leaves of: